Busoga Health Forum in partnership with the Obwa kyabazing bwa Busoga has carried out a stakeholders’ meeting with an objective of finding solutions to the rising teenage pregnancy cases in the sub-region.

The event took place on 5 November 2021 at Jinja City Hall and was graced by a number of organizations in the Busoga sub region.

The objective of the meeting was to find ways of contributing towards ending teenage pregnancies through designing a package that can be delivered jointly across civil society organizations.

Owek. Joyce Abaliwano, the Minister for Gender and Children’s Affairs in the Obwa Kyabazinga bwa Busoga referred to the teenage pregnancy as an ‘elephant’ in the region. It has too many faces and therefore must be tackled from different angles.

In Uganda, it is estimated that more than one quarter of adolescents aged 15-19 years old become pregnant; with the rates being higher in rural communities compared to urban communities.

The factors for the teenage pregnancies in the region include poverty, negative media influence that is characterized by nudity and obscenity, low acceptance and uptake of contraceptives, and lack of youth friendly corners.

Participants called upon parents to become the first role models for their children before other sectors come on board. There was consensus that parents are less involved in their children’s lives.

Owek. Joyce Abaliwano recognized the role played by schools in keeping children safe.  She attributed the rising cases of teenage pregnancies to closure of schools due to the Covid -19 pandemic.

She noted: “There are chances of us remaining irrelevant because the girls we want to keep in school are getting pregnant.”

Busoga sub-region contributes to over 7% of the teenage pregnancies in the nation with Kamuli and Luuka districts reporting the highest number of teenage births for the years 2020, and 2021 respectively according to a  UNFP report.

According to a 2014 World Bank report, Uganda is still classified as a high burden country with deficiency of Sexual Reproductive and Health Rights (SRHR) services, with only 5% of the facilities supporting youth friendly SRHR services and of these, Busoga sub-region attributes only 25%.

Ms. Barbara Kateu of World Vison Bugiri, says some of the challenges faced in tackling teenage pregnancy include the weak reporting, referral and limited investment in the child protection services.

Participants called upon the Government to interest districts to start working on the identified challenges and allocating more funds to the critical sectors in order to engage with the right communities.

The participants also agreed that Village health teams (VHTs) should be engaged as an intervention package. VHTs are doing well in areas such as immunization. They can still do better with adolescent Sexual and Reproductive Health and Rights education if given the right information to put across.

“There is also need for data to be broken down so that the communities can understand the magnitude of the problem at hand,” Ms Mutetsi Deborah, the Executive Director Women Initiative in Poverty Eradication emphasized.

She added: “The parents should be empowered if children are to be empowered. Parents do not have information. There is need to focus on having activities that can bring parents on board which will take us back to community engagements.”

Owek. Joyce Abaliwano called upon media personnel to be sensitive especially in the way they pass on information. “Teenage Pregnancy is rape and defilement, we should not sugarcoat it and there should be a deterrent voice in the reporting by the journalist,” She added.

Mr. Innocent Anyole, the Station Manager Busoga One called for a community teenage task force aimed at having teenagers spearhead the fight against teen pregnancies.  He further said that it will be more effective if the teenagers lead the fight because they know what they are dealing with.

Mr. Moses Kyangwa, the Chief Executive Officer, Busoga Health Forum applauded the participants for giving the organization the chance to convene such a forum. He emphasized that from this meeting, the organization would come up with action points and commitments for the different organizations in the fight against teenage pregnancies the sub-region. 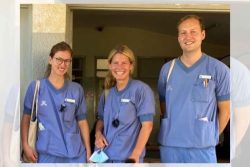